Ugh. I hate Colleen. Mainly because she got me kicked out of a stupid blogging contest (I have no proof of this, but I am pretty sure it was here.  What a jerk! I kid.), but mostly because she wrote a book.  I want to write a book.  Buy her book dammit.  She’s also from the East Coast and those people are batshit crazy.  Meet Colleen….

I’ve three kids, a dog, a house that apparently doesn’t take care of itself but then again…neither do the kids or the dog. I had a career that went stale which forced me, at 43 years of age, back into the classroom! My car died. The dishwasher died. The microwave, dryer and garage door all bit the dust and the big screen TV we paid a fortune for…that went two months ago.

“You look tired” I’m told on a regular basis.

I’ve been putting out one fire after the next, pulling all nighters to finish homework, chasing my tail, burning the candle at both ends while trying to get the kids everywhere they need to be, accumulating a ton of debt, hanging out with lawyers and judges for shits and giggles and damn near losing my mind.

Yup…tired and exhausted! That’s me!

However, I’m kind of really super happy. As in, I didn’t know my life could be so full of wonder and happiness! Don’t get me wrong…I could do with a little less drama but the rewards far outweigh the shit storm.

Almost five years ago my life as I knew it, came to a grinding halt! Faced with the end of my marriage, after I spent a few months with my head in the sand…slowly, slowly, painfully slowly, I started moving forward and while I was moving…I made a few notes. I started a blog…people read…encouraged…supported…and then, they asked for the book!

Full Speed Ahead is my story. It’s about putting one foot in front of the other when all you want to do is lay down and curl up in a ball. It’s about the friends that dragged you forward, the family that stood by and helped, the kids who turned out fantastic and the dog who became my constant companion.

It’s about being freakin’ tired. Exhausted. Down right ready for a big ol’ dirt nap. It’s about moving forward…one step at a time, wearing a smile on your face and a whack of concealer.

To hide the bags.

Full Speed Ahead is Colleen’s first attempt at publishing a book. It was her dream to write…and now it’s her dream to sell as many copies as humanly possible. With so much support, there’ll probably be a movie in which case, there will most likely be a lot of room for back ground characters. Colleen will eventually let you know where you can apply to be part of the supportive cast. However, first things first…buy the book. http://www.curtainsareopen.com/book/
Disclaimer: Kyla Cornish was paid A GREAT AMOUNT of money for this post. As in…none at all. Bloggers work for free all of the time! Just ask any blogger to flog your product…they LOVE that.
Disclaimer 2: Kyla seriously wasn’t paid any money at all but Colleen will send her a book! Again, this isn’t typical…normally bloggers like it when they get paid in cash AND product. But Colleen doesn’t have any money. She’s a blogger.
Disclaimer 3: OK, seriously, Kyla and Colleen have been following each other, as bloggers do, for a few years now. Not following as in “stalking” but following on Twitter and Facebook…though if they lived closer, they’d probably stalk each other! Kyla suggested that I (Colleen) write a little guest post to tell you about my book and that’s really super cool of her!
Disclaimer 4: Just for the record, since Kyla is being so kind, Colleen feels she has no other choice but to apologize to Kyla for getting her kicked out of a blogging contest. But she really, really wanted to win!
Disclaimer 5: OK WHATEVER, I didn’t have her kicked out! But next time, I definitely will! 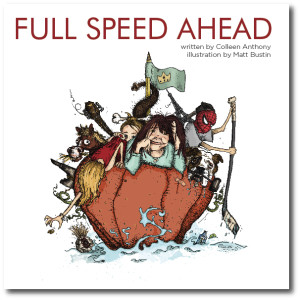