I’ve been going to Toronto for years. Mostly on my own and a few times with my husband. After our family trip to Vancouver, I knew that I had to take my kids to T.O. Not all kids dig cities. Mine freakn’ love cities. This is How to Visit Toronto with Kids!

Hilariously, we were only a few steps out of Union Station when our 8 year old yelled, ” I AM GOING TO LIVE HERE WHEN I GROW UP”.

I call that “Family Vacation 2019- Mission Accomplished”. AM I RIGHT?! 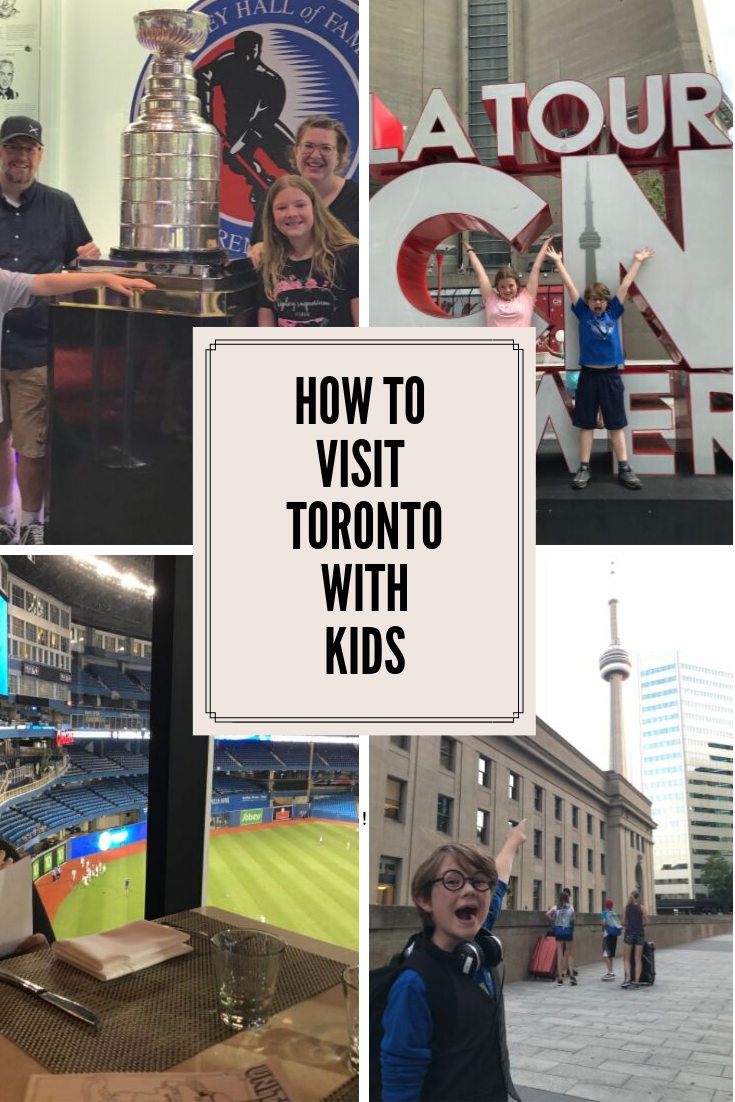 I highly recommend making your next visit to Toronto a vacation for the entire family. My advice is to stay at least 3 nights. I wasn’t intimidated in this city at all. It was electric. It was easy to get around. It was awesome.

Are you ready for this?

We flew into Pearson Airport and took the UP- Union Pearson Express,-

This brought us right to Union Station in downtown Toronto. It was easy to use, it was clean and they had a family ticket option of only $25.70 for the one way. Plus, the kids loved it! 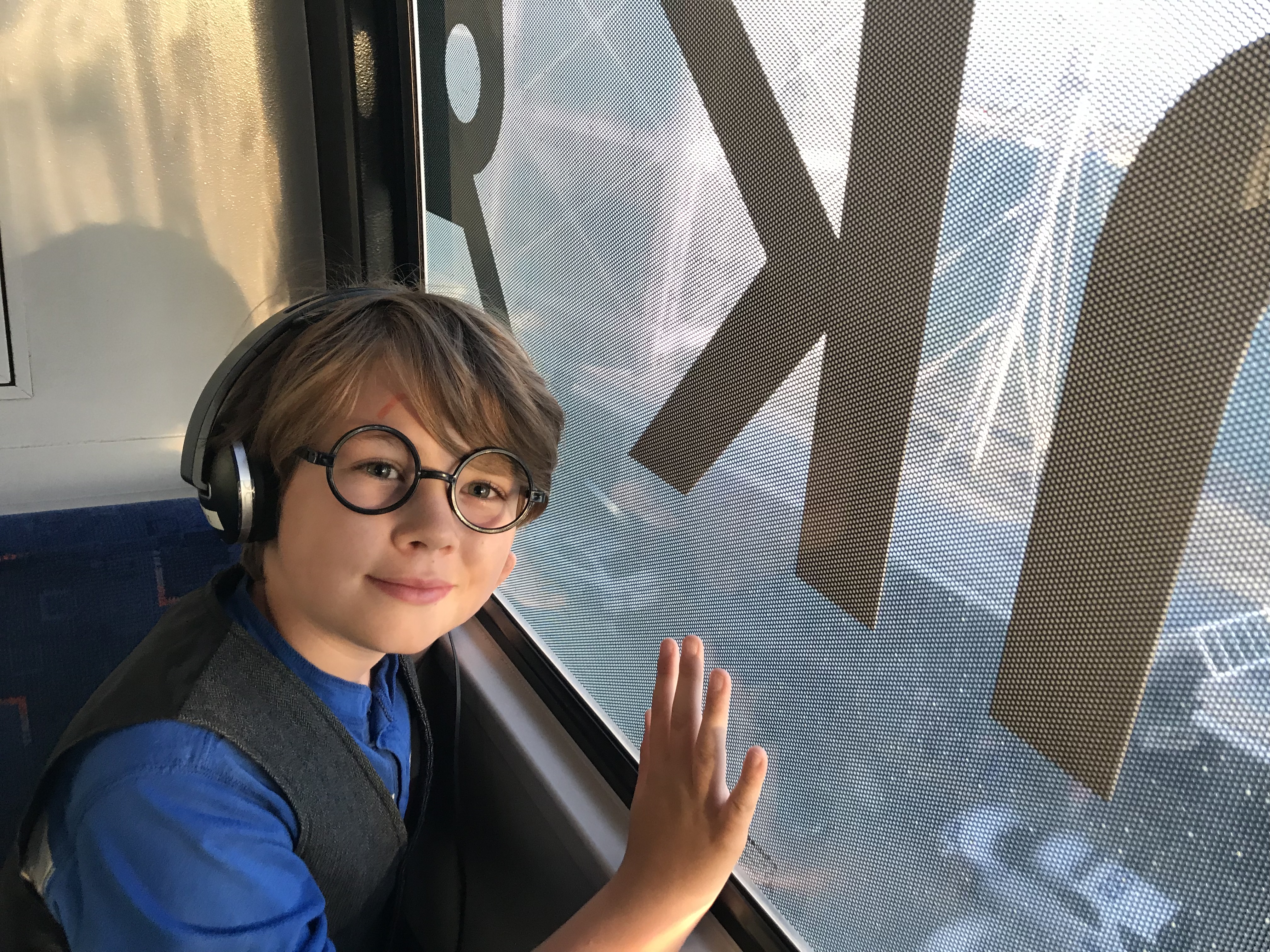 We decided to stay at Hyatt Regency on King Street. I chose this hotel mostly due to the location to Princess of Wales Theatre (Hello Lion King!) it was within walking distance to the places we wanted to see, it had an outdoor rooftop pool (and outdoor bar) and it also had a really good summer promotion. I’m a sucker for a deal. Don’t get me wrong, it wasn’t cheap. But, it was very comparable if not less than the others in the same area. Please note that we missed this until the last day, but the hotel restaurant provided free buffet for the kid’s in the morning. No one told us this and had we known we would have had breakfast their more often. So ask about that, m’kay?! We debated staying in an Airbnb but am glad we chose this place.

We spent a ton of time in the pool. I find that this is the best part of family vacations, anyways. I mean, who hasn’t taken their kid to Disneyland and had them only talk about the pool once they returned home?! 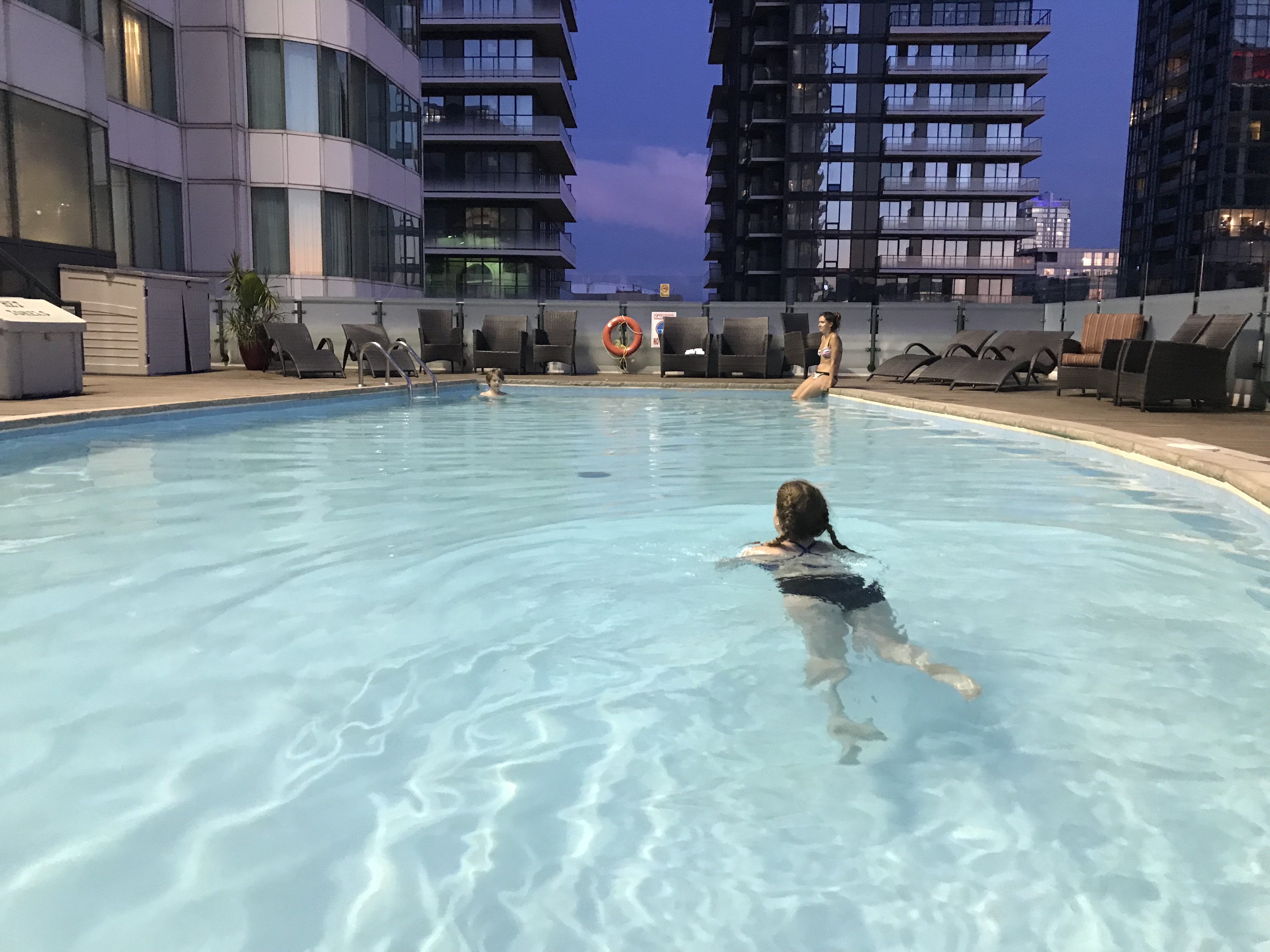 The kids were most excited about the CN Tower, so we made that our first stop. My advice is to go to the CN Tower and the Ripley’s Aquarium in the morning because the crowds get totally bananas in the afternoon.  If you have to choose between the CN Tower and the Aquarium, I would choose the CN Tower. The Aquarium is great and it has the most amazing water tunnel, like EVER, but it is super pricey and absolutely packed with people. Due to all the people, we didn’t spend as much time there as we have in other Aquariums we have visited. That was a bummer, but then it left us with extra time to add in unplanned stops. More on that later.

Back to the CN Tower. It’s a must-see and do. And if you are really brave, try the EdgeWalk.  Shop around for tickets, you can buy combo passes and city passes for the CN Tower. 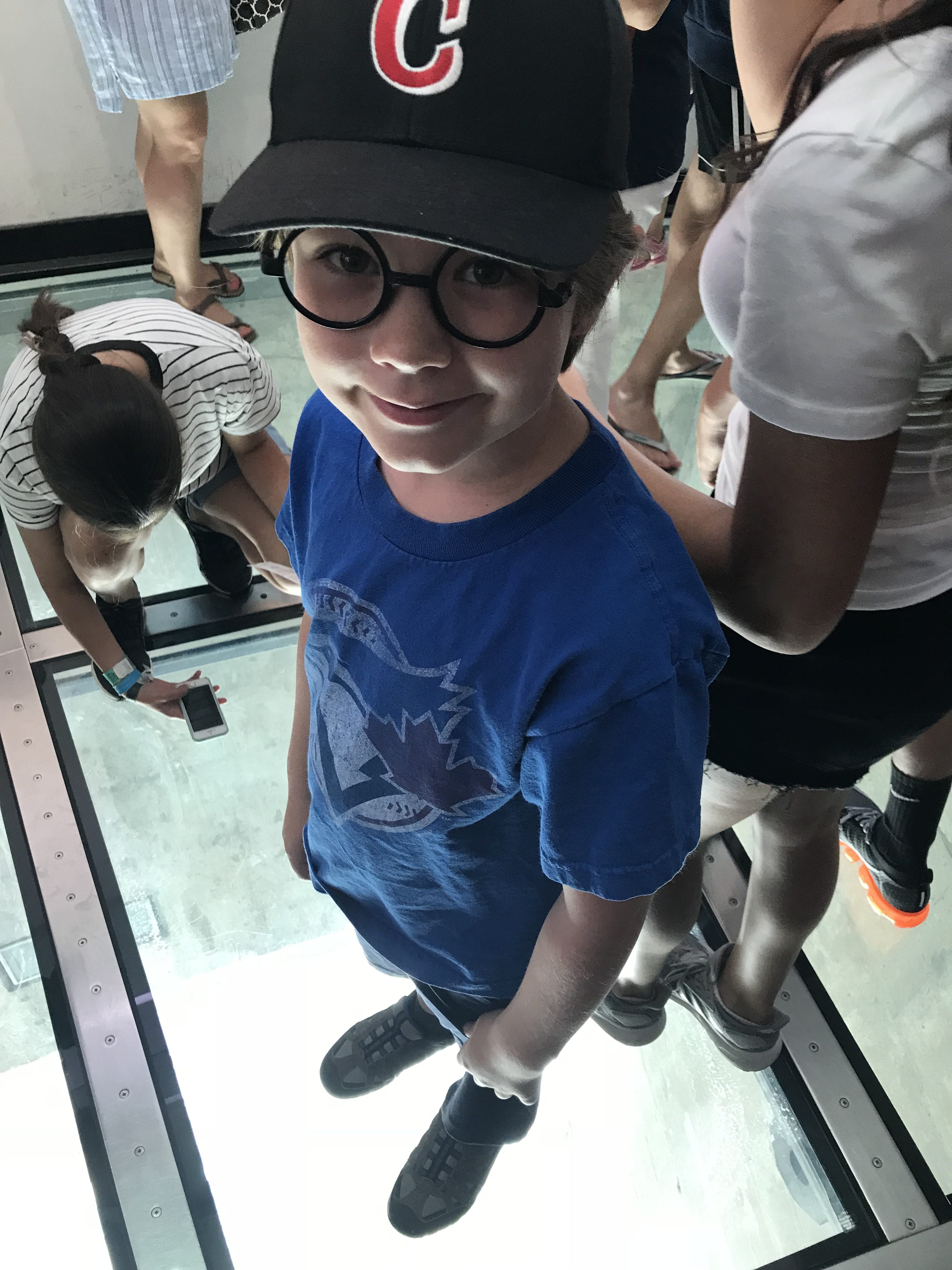 I freakn’ LOVE these photos. The glass floor was definitely a highlight! 3 out or 4 of us had a blast and our son is asking to go back again to spend more time. I’m pretty sure that means he wants to do the EdgeWalk. Um…. that’s a hard no from me. 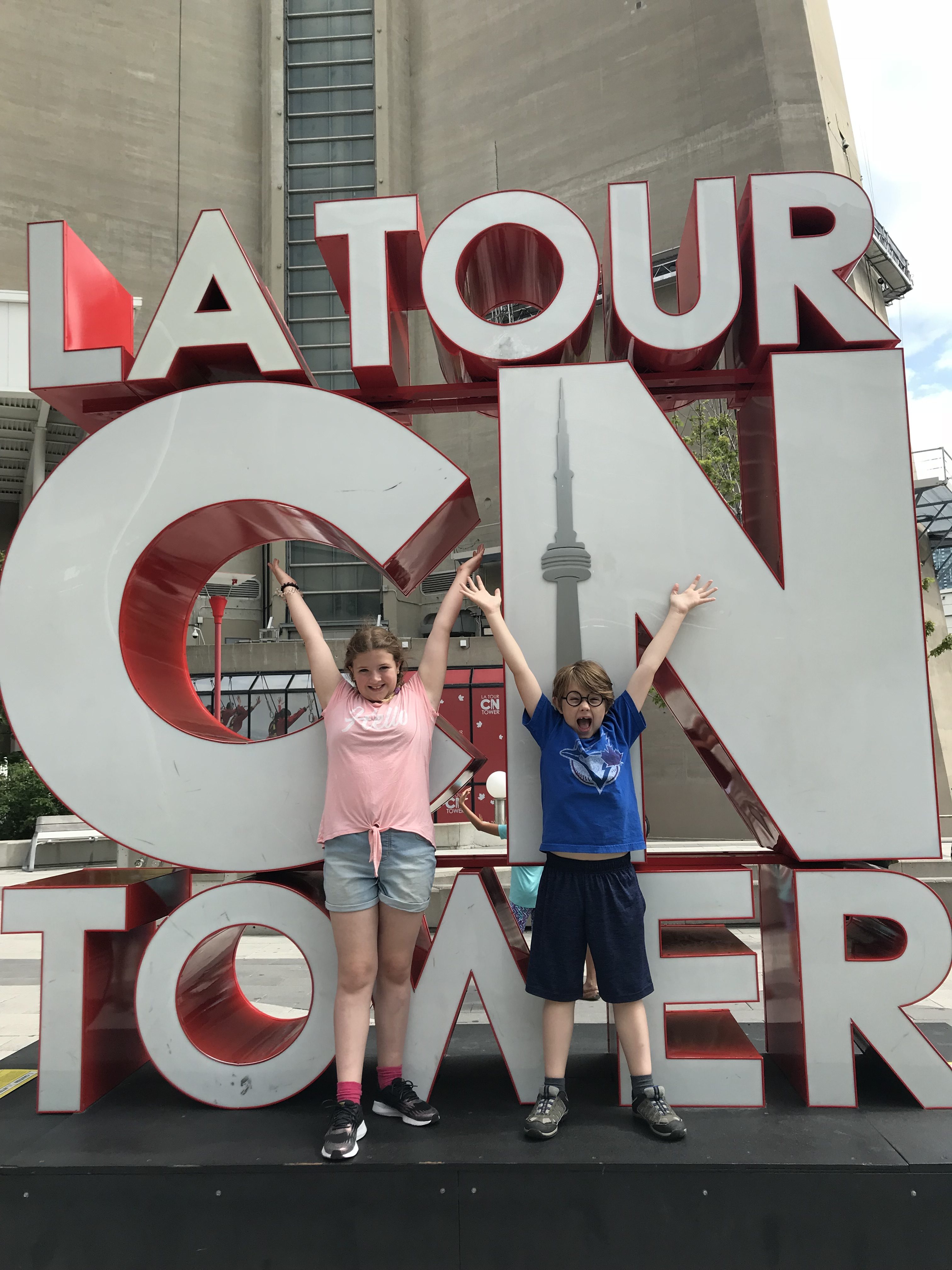 The Toronto Blue Jays were out of town, which was a total mistake on my part, I screwed that up royally, but we heard of a restaurant you could eat at that overlooks the field. I am so glad we did this.  They had a great kid’s menu and the french fries were amazing. It wasn’t the most affordable lunch, around $70 fr the 4 of us, but the view was amazing and it provided a sit down break that we all needed. Also, it’s only about a 3-minute walk from the CN Tower. No reservation needed if the Jay’s aren’t in town. 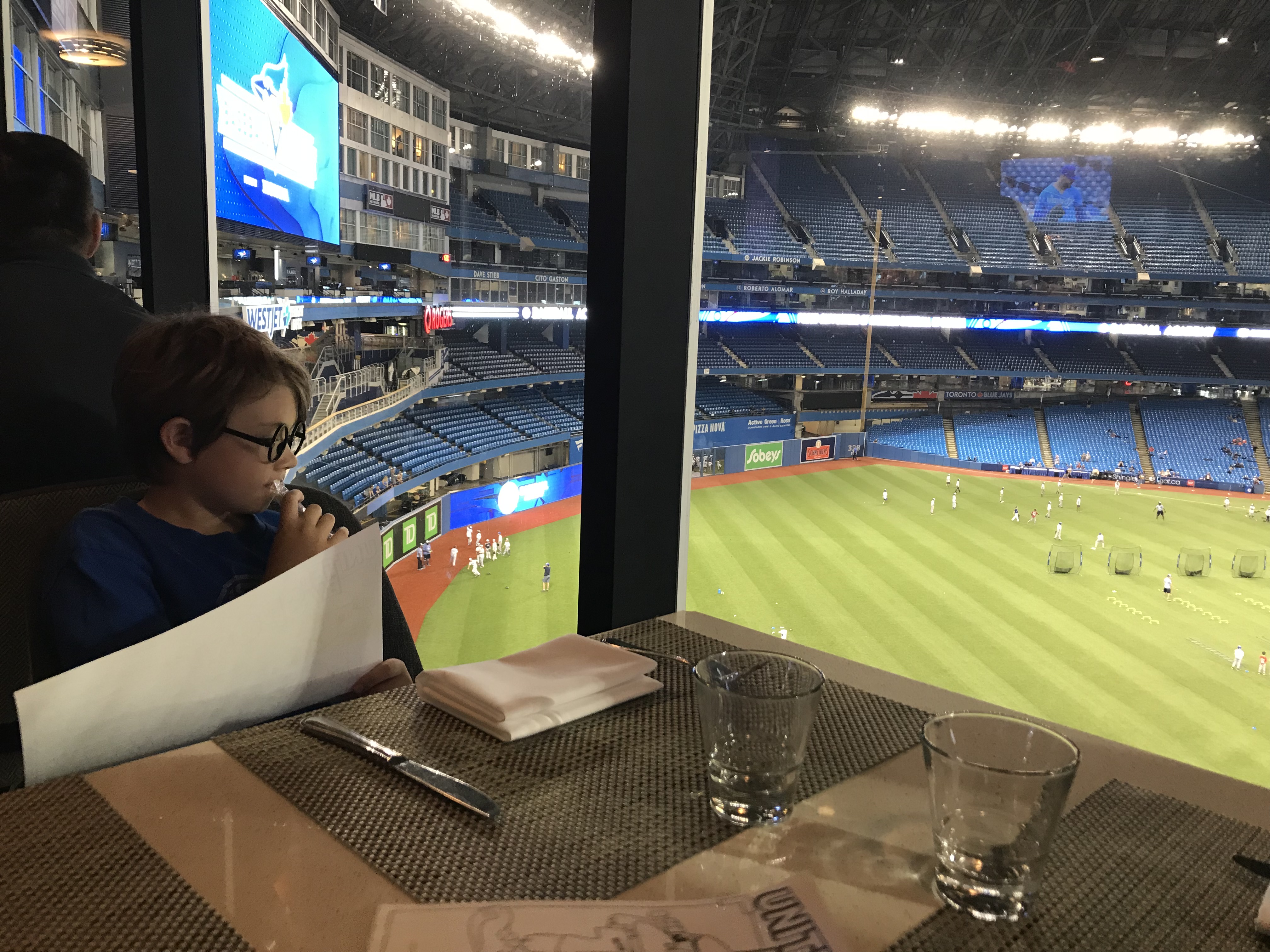 At this point, the kid’s were pretty tired and I knew if I could tempt them with ice cream, I could get them down to the Waterfront. I love the Waterfront in Toronto. If I could do it again, we would for sure take the ferry and go to Toronto Island.

There is an amusement park for littles and I think the kids would love the Tram Tour and Ferry ride. For me, it’s all about the views of the city from that Island. That’s on our list for next time!

So this is when we pushed it too far. I mean, that hug is about to turn into a strangle. Am I right?!

Without any research, I wanted to go to Scotiabank Arena to see if we could get in on some of the lingering magic of the NBA Champions, the Toronto Raptors. We hit up a couple of stores and got our fill of WE THE NORTH swag.

My husband is a huge Toronto Maple Leaf’s Fan so we took a photo opportunity just for him. This stop was not a must-see, and we could have done without it, but look how happy he looks! 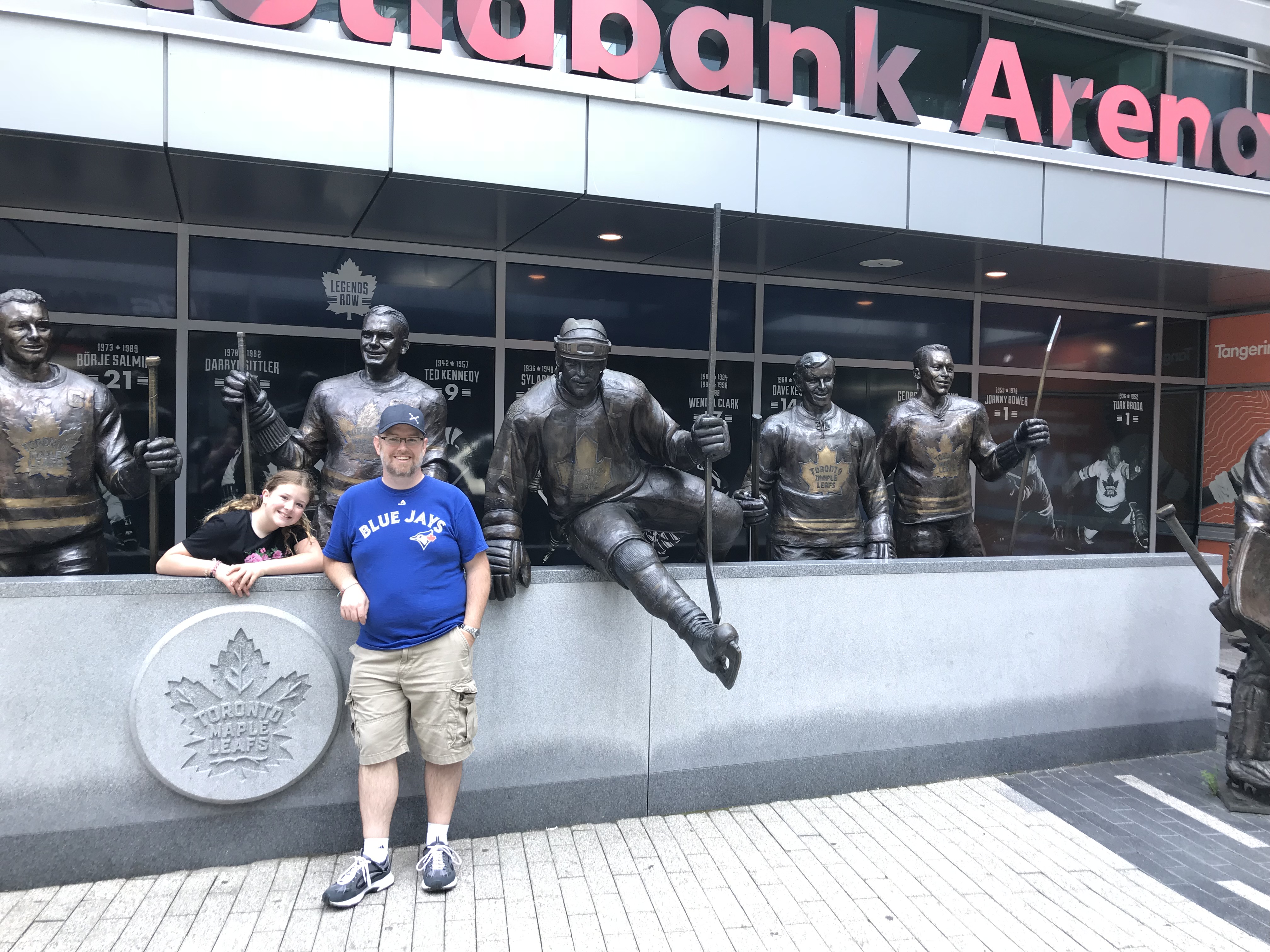 Which brings me to this…

You want to know what your kid’s don’t care about?

What you want to see and do.

My husband and I love the nostalgia of CBC. The CBC studio building is the coolest, but not so cool for the kid’s. My husband did talk them into sitting on things for us. Basically, I sent him there to get himself another CBC shirt but he couldn’t find the store. This cracks me up, because I wasn’t with him, he never found the store. You want to know what I do on vacation? I ask questions. To everyone. It drives my kids crazy. But, it’s the only way to find things in a city you don’t really know. People are nice if you give them the opportunity! 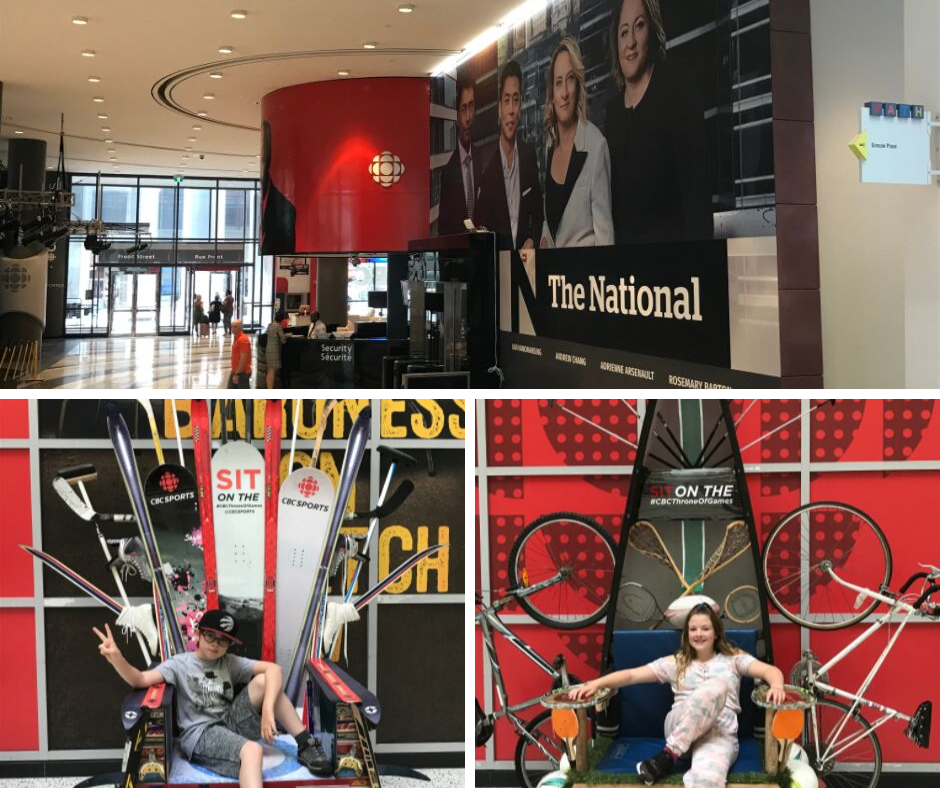 Toronto is a very walkable city, but if you need a break, I suggest doing the Hop on Hop Off bus tour. It was pretty affordable for a family pass, plus it included a boat ride (that we ran out of time to use). THE BONUS? The tickets were good for 48 hours. The kid’s loved being on top of the Double Decker bus. The stops are awesome, but our favourite was Yonge and Dundas Square. (check their website for their amazing free events)

And now for the reason, we booked the dates we did for Toronto…

LION KING! Toronto has amazing theatres and fantastic Broadway shows. This was a total highlight for me. As you can tell we have a Harry Potter fan, so I think we might have to book another trip when Harry Potter and the Cursed Child is on next fall. If his love of Harry Potter is still as fierce as it is now, I might just have to start selling all my vintage pyrex on Facebook to pay for the trip! 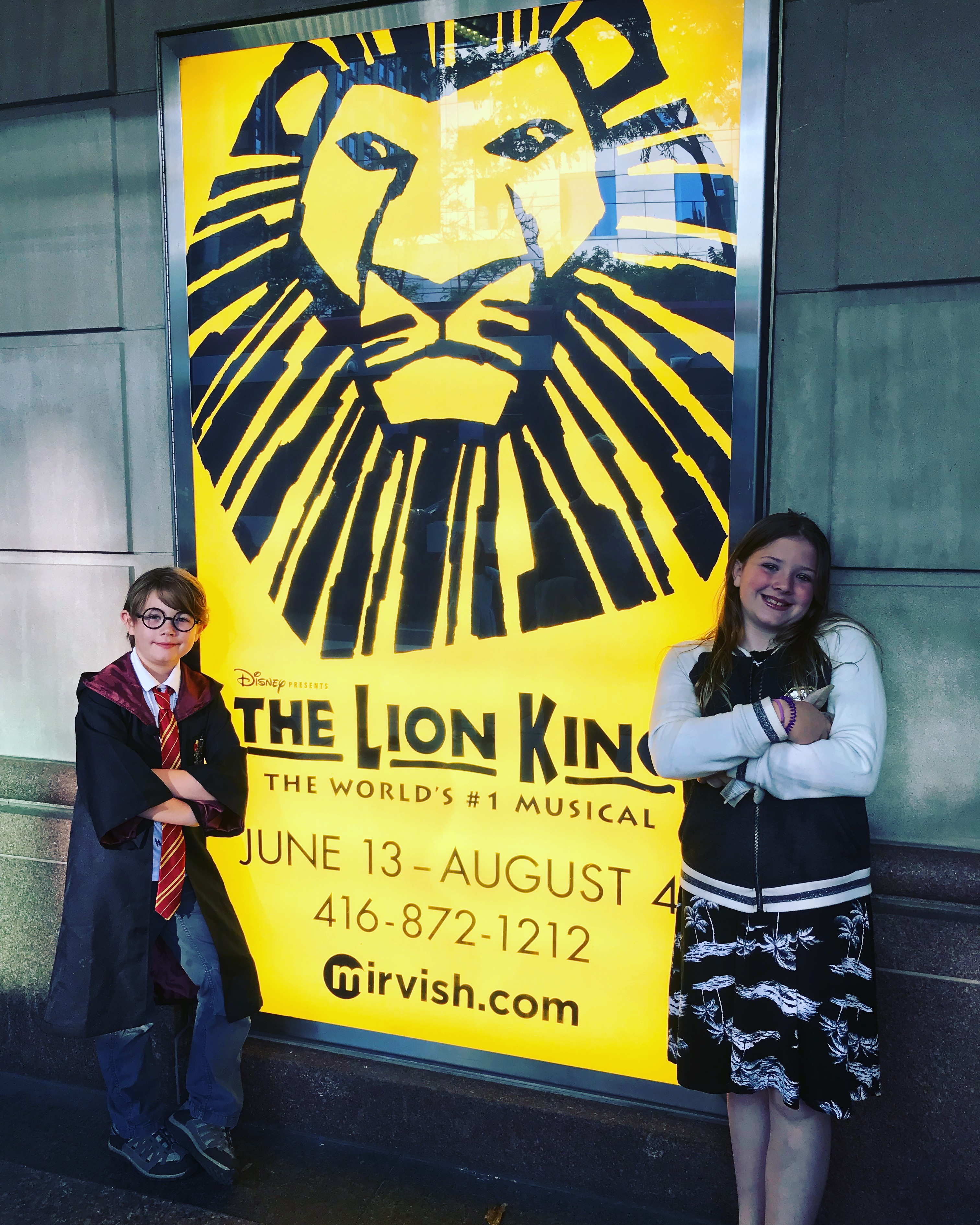 Our other recommendation is the Hockey Hall of Fame.

I am so glad for the interactive stuff like the TSN Broadcast Zone, the TSN Theatre (3D 3o minute film) and the NHLPA Game Time. This was the stuff that the kids were into. Expect to spend about 2 hours there if your kids aren’t into hockey history. I was super surprised that my daughter was excited to see the Stanley Cup, but everything else that wasn’t interactive was a bore to my kids. The Hockey Hall of Fame is also incredibly affordable! Plus, there is an amazing food court just outside of the Hockey Hall of Fame. 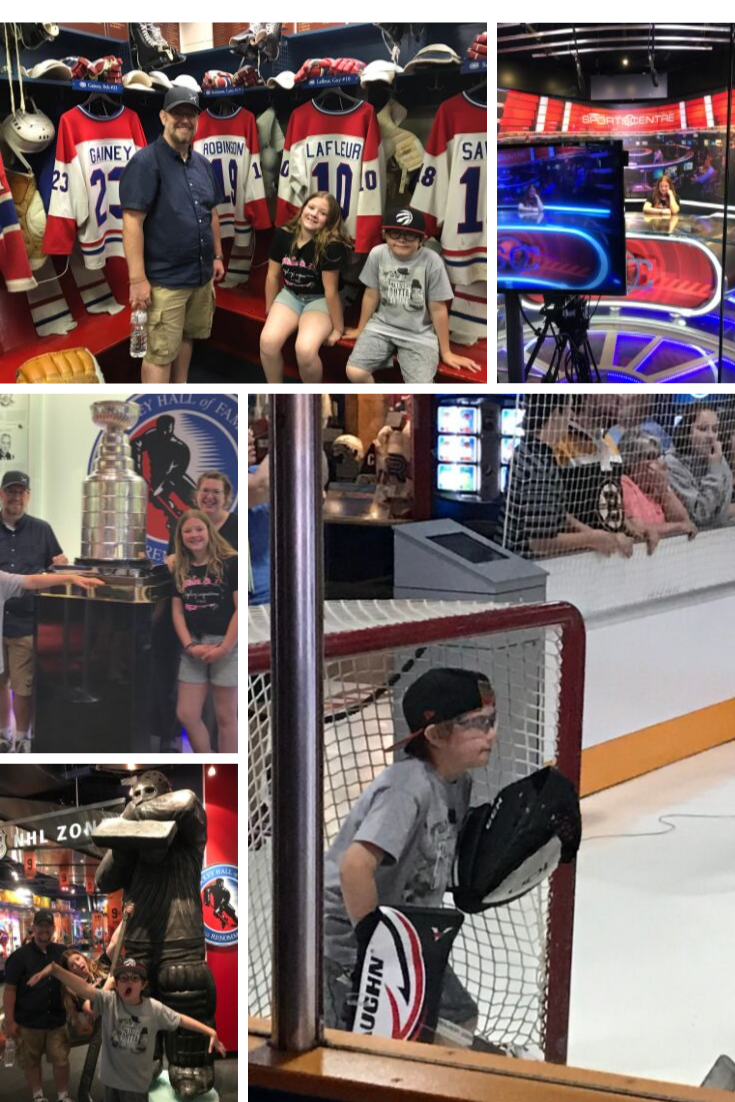 I always get asked where we eat with our kids. Honestly, it was a bust this trip. Usually, we find some cool little spots, but didn’t really this time. We just pretty much ate when we were hungry. Thankfully, Tim Hortons, McDonald’s, Starbucks and A&W’s were always close by when we needed them. Sure, that’s a bit lame, but I would rather eat a McDouble than have my kid cry because they forgot to put cheese on his hamburger in a nice fancy restaurant.

Other places that you need to experience?

Nathan Phillips Square (we gave up, the kids were tired). This is where the cool Toronto sign is and where people skate in the winter.

Queen Street is just the coolest. Hit up Grafitti Alley. (It was getting dark and our McDonald’s was getting cold, so we just quickly scurried by. I fully regret this now. Such great photo opps!)

St. Lawrence Market, is a fantastic place to “do lunch”. It just didn’t groove with our plans with kids.

I guess we will be coming back!

Have you been to Toronto or are you planning a trip? I would love to hear about it. I would like to thank the Hockey Hall of Fame, CN Tower and Hyatt Regency for their support during our stay. We hope you like our advice on How to visit Toronto with Kids.