Skip to content
My friends husband is a complete food weirdo.  I also love ketchup. My parents actually call me ‘The Ketchup Kid”, but Kim at Two Bugs and a Blog is married to a guy who takes the cake. Speaking of cake. I actually have a ketchup cake recipe. I wonder if he would eat that before or after his salad….
As a mother of two toddlers you would think the most frustrating part of my day would be feeding them. Alas, it’s actually trying to feed their stupidly picky father who also happens to have some of the most ridiculous eating habits of any 6 year old, I mean adult I know.
Here is a list of the things he does that drives me to drink:
Ketchup on his corn, seriously, who does that?

Hold the gravy for his mashed potatoes, don’t want it to interfere with the half pound of butter pool he has going on, but gravy with cheese curds and fries, oh well, ok then.

Ketchup on his chicken, turkey, ham, seeing a theme here….? 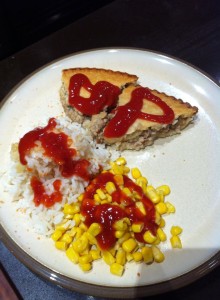 His food can’t touch, hmm maybe those toddler plates with the portions actually will get used

No hot beverages, or soup, even the Neocitron gets cooled down before being consumed.

He thinks eating a calzone is healthier than a piece of pizza, because yes, an entire pizza rolled up is much better than one even 5 slices!

Nothing spicy, chili must come with three buns smothered in a weeks worth of margarine, side of sour cream and be made with brown sugar. I wish I was kidding

We play the “What is it?” game, if there is any hint of vegetable or leafy green, in his sauce, lasagna or other, especially any suspected mushrooms, dinner is officially ruined for him.

No pie, ever, EXCEPT when it’s tortier, yeah cause mystery meat pie is MUCH better than apple, pumpkin, blueberry, strawberry/rhubarb, I can go on.

Knowing what I know about his childhood, I do not understand where these habits come from, his twin sister raised in the same home is one of the best eaters I’ve ever encountered, she’s always up for a culinary adventure, which is one of the reason’s I love her. Yet hubs, well, he’s always up for fries, but with ketchup on the side. Weirdo.

BIO: As a first time mom in her 30′s I found that being at home with my little guy was fantastic at first, but by the 6th month I was starting to go a bit stir crazy and was looking for something that got me out of the house that didn’t include singing in a circle.  I spend a lot of free time searching the Internet for all things baby and celebrity needed a blog to write about it, since my hubby sucks at pretending to listen about my findings, musings or vents about random stuff that comes up during
my days at home. I’m a self-confessed wanna-be celebrity stalker, google addict and wine aficionado. Oh and I love the Flames!

5 thoughts on “The Ketchup Kid Ahem…Husband…”