These last 3 months have been really difficult for me regarding money and paying down our debt.  I have struggled and I’m feeling torn about our debt. Three months ago I shared with you our 6 Month Debt Update, I was really hoping to keep up that momentum of $400 a month onto our line of credit and possibly even double the amount to $800 a month of debt paid each month.

It didn’t happen (more on that later).

Our goals for those 6 months were simple.

We did #2 because we do not really want to change our lifestyle that much.

Stats say the average consumer debt is $15,000. Consumer debt is/are things that don’t depreciate. Like, going out to eat or clothes or vacations.

When starting this journey of paying down our debt, I was never open and honest about how far in debt we are, I’m still unsure what I want to share. Just that my husband and I each identify at the average consumer level. In paying down our debt we are focusing solely on our line of credit, not our home mortgage or our monthly van payments. 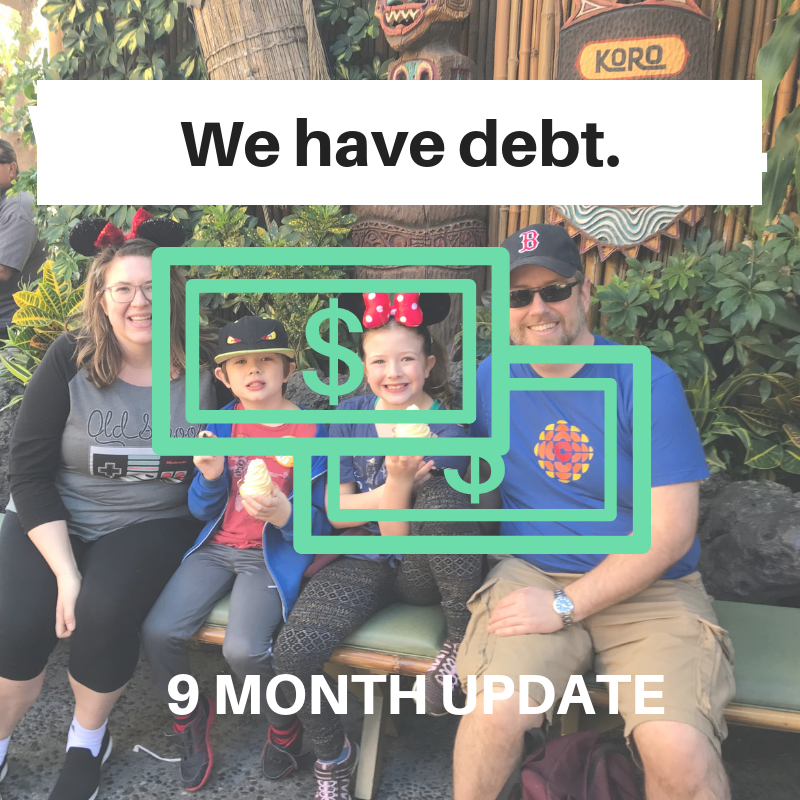 When I wrote the last update 3 months ago, I didn’t have the support of my husband. Not that he was unsupportive, but he wasn’t actively trying to pay down his consumer debt. That was only my line of credit that I paid the $2400 on. He didn’t pay down any of his consumer debt that month, but he also didn’t add to his line of credit.

We don’t have joint banking accounts. But, money passes through our accounts often with etransfers.

There’s a point coming, I promise. Stay with me….

I have felt very shitty about my contribution to paying down my line of credit these last 3 months.

Christmas was so fucking hard.

I’ve never budgeted for Christmas before. I just buy what I need to buy and pay it off later. Or in my case, I never actually paid it off. You know that Instant Pot I bought my sister for Christmas? Yup, I still owe for it.

So, this Christmas I decided to do something different. Once November hit, I decided to start putting money away for Christmas. I still bought whatever I wanted for whoever I wanted, but I saved for it first, so did Chris.  I had never done that before. It was such a fucking shock. We spend a ton of money at Christmas, and that is not something I am willing to give up, but from now on, I am going to start saving for it. Lesson learned, people.

Like, I said earlier, I really struggled to pay down my line of credit these last 3 months.

This is not including the $341.90 that I was charged in interest.

It’s super hard to focus on that, though.

There is a bit of silver lining.

Remember at the start of this post I told you that I feel torn about our debt these last few months?  There is a reason for that. I feel shitty, but I also feel super proud. Chris got on board t and paid off $1100 of his consumer debt.

Together in the last 3 months, we have paid $1600 down on our lines of credit.

~Each month we have invested a few hundred dollars into our RRSP’s and our Children’s RESP’s.

~We have quit putting money into our emergency fund, we have enough to live in our home for 6 months without jobs.

~We are saving for a group family trip to Mexico for next fall, for my daughter’s competitive dance season and for a flight home for the summer. It feels like a lofty goal to do all this AND put money on our line of credit.

2 thoughts on “We Have Debt- 9 Month Update”