Let me take you back to a time where t.v wasn’t available at a push of a button…

The very first time my husband and I binged on a t.v series it was Six Feet Under and we rented it from Rogers Video. We drove there and walked around picking out our choices.

Then it was Weeds,  we got those from our membership to Zip.ca  You would pick out the movies you wanted to see and then they would mail them to you with pretty much no rhyme or reason and you had to mail them back before they would send you another one to watch.  It was awesome because you could pick and choose some really obscure movies that you couldn’t get at your local movie rental place.

Then it was House of Cards with Netflix.

Our television watching has never been the same since.

Everything we watch is a binge. We rarely watch one episode and then turn off the t.v. Master of None, Grace and Frankie, Suits, The OA, Narcos, Shameless and on and on and on.

Recently we were together with a group of friends and we were chatting about how different it is to watch t.v now then it was when we were kids.

Remember waiting for your show to come on?

The excitement of knowing Family Ties or The Cosby Show was going to start in 2 minutes was thrilling. If the phone rang, I was furious. If it was a repeat, I would be devastated.

If my brother or parents wanted to watch something else, I would have to miss the episode. It was horrible.

Then we got a VCR.

Wait, I could go to Volleyball practice and tape Beverly Hills 90210 at the same time?

But, you never, ever, ever watched more than one episode at a time. And never during the day.

Netflix recently looked at their stats to see what shows people were watching at what time of day. It’s pretty fascinating. 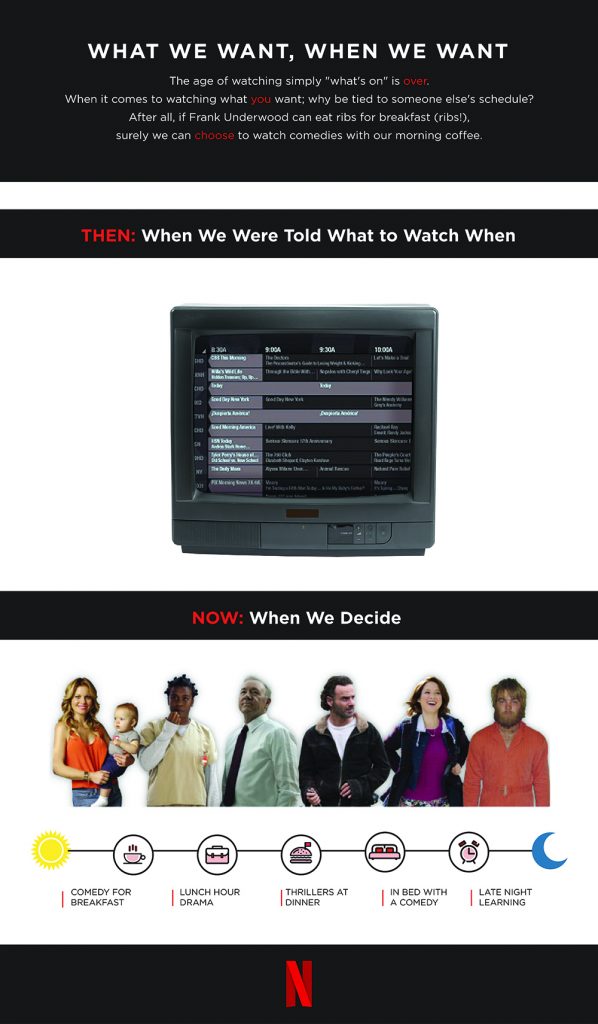 I am so honoured for the relationship that Mommy’s Weird has with Netflix. It means so much to me to be on the Stream Team. Squeeee Season 5 of House of Cards is almost here…