Did you know that April is the Canadian Dental Association Oral Health Month?

I didn’t.  But, I think subconsciously I did, because my kids have eaten so much candy crap this Easter, that I have been lecturing them on all thinks “teeth” lately! It’s so bad, that my daughter and son actually had a fight over who was and who wasn’t brushing their teeth properly this morning.

Have you ever had to step in and stop a full on fight about brushing teeth?

Jot that up as something else I never thought I would have to do in my life.

Parenting is no joke.

It all started because Whirlwind thought that Bot had faked brushing his teeth. So she started to berate him about his teeth all turning rotten and that he was a big fat liar.

Bot started to cry and demanded that she smell his breath.  He stuck to his guns that he did brush his teeth, but he did it with his mouth closed.

She told him he was stupid.

He hit her with his toothbrush.

Yup, it was a great start to the day. 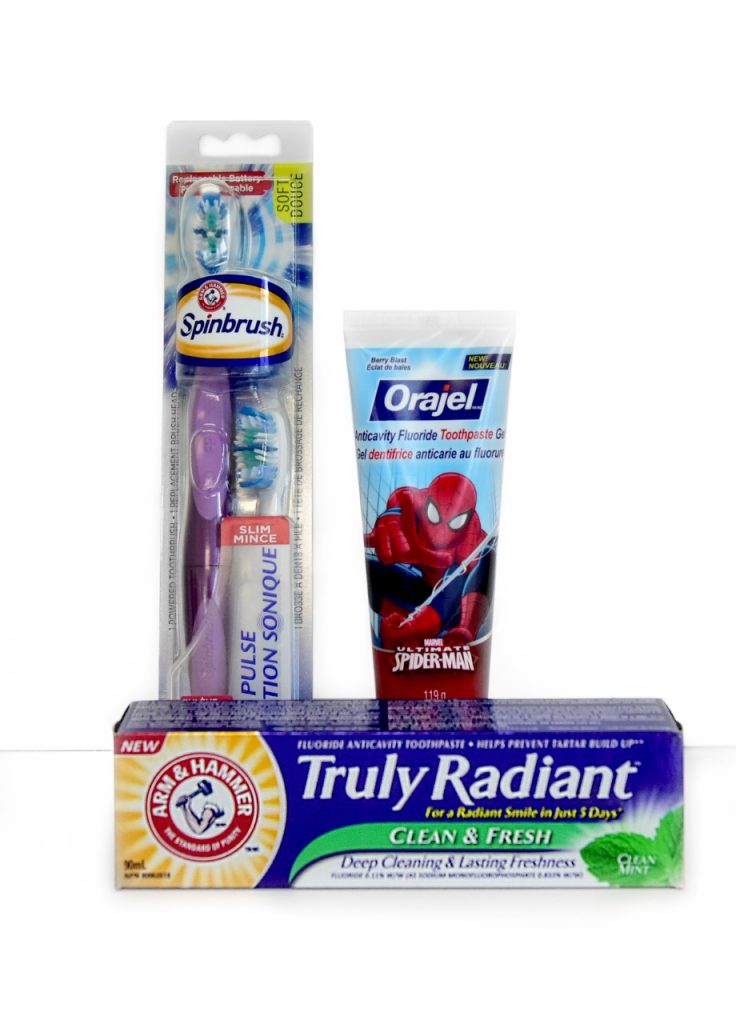 Need some help stopping morning battles at your house?

-Children often look at mom and dad as role models, so make sure you lead by example and talk to them about the importance of taking care of their teeth and gums!

-Suggest using a timer or a song to ensure that the kiddies are brushing for as long as they’re supposed to. You can even make it a family activity by doing it all together.

-Give your kiddos a bonus for brushing. A sticker chart that keeps track of their brushing habits is a great way to give them an incentive to brush.

-Introduce a toothpaste and brush that features one of your kids favourite characters – such as the Orajel™ Spiderman™ and My Little Pony™ Anticavity Fluoride Toothpaste and the Kids Spinbrush™ My Little Pony™ Battery Toothbrush. It keeps things exciting while practicing healthy habits!

And if you are anything like me, probably coming up with a new routine is not a bad idea, I am really bad for remembering to replace my toothbrush every 3 months….

-Make sure you’re brushing and flossing at least twice a day to achieve optimal oral health.

-The Canadian Dental Association recommends replacing your toothbrush or toothbrush head every three months or sooner if it becomes worn, for an optimal clean.

-Use a battery-powered toothbrush with sonic pulsating action.  For example, the new Arm & Hammer™ Sonic Pulse Battery Toothbrush is clinically proven to remove 2X more plaque versus a manual toothbrush. This toothbrush has a slim, ergonomic handle, and comes with a replaceable head and battery!

-If you can’t resist desserts and candy, pay attention! Foods that contains a lot of sugar can stain your teeth and soften tooth enamel. I recommend Arm & Hammer™ Truly Radiant™ Clean & Fresh™ Toothpaste for enamel safe whitening and lasting freshness plus it prevents tartar build up!

Mommy’s Weird is an ambassador for Church & Dwight.  In exchange for sharing our favourite products with the readers of Mommy’s Weird, I receive perks.