NOTE: This is the post that keeps giving and giving. Thanks to Shauna. Due to popular demand….

Yes. I have been sucked into the nightmare that is known as The Elf on the Shelf. I have no idea how it happened. I just went to Cole’s to buy a book for Christ sake.

If you’ve been living under a rock for the last year or two let me explain. Some woman – Carol actually – came up with the idea that a little elf would “appear” at her house through the holidays. A personal elf that comes just for her children. The elf hides in silly places all over the house, leaves at night to report to Santa how the kids have been behaving and then returns in the wee hours of the morning. Always sitting in a different spot than the day before. The elf returns to the North Pole on Christmas eve and you don’t see it again until the holidays the following year.

Awwww! Sounds so cute, doesn’t it? So much fun for the kids! What a fantastic tradition. I want so badly to meet Carol, who is literally making millions off this idea.

And congratulate her for being such an asshole.

Nov 12th I’m going through my closet and spy the box I had put away. I really want to set this elf out. My girls, who are 5 and 8 are going to love this! If only it were closer to Christmas.

Well…….we DO always put our tree up on December 1st. And that’s only 18 days away. So just over 2 weeks really. And some people DO have their Christmas lights up now. And there IS snow on the ground….

It only took me 30 seconds to convince myself that Christmas was right around the corner. My sister is always conveniently 3 hours away when I need her to talk me out of stupid shit.

Because in reality Christmas was 42 days away.

The morning of the big reveal I wake up to find my kids downstairs watching something on the computer, Elf book on the table untouched. If they moved their eyes a smidge above the screen they’d see the elf. Sigh. I grab a coffee and go to the table. I have to get the ball rolling here. Sometimes I think the world could be coming to an end and my kids would just carry on eating cheese stringers and watching inappropriate Annoying Orange videos on YouTube.

So we read the book, they search for the elf. They’re so excited! I mentally high-five myself for being such an awesome mom. They find her, there’s happy squealing. Then D, my 8 year old says “No. She’s not real. Nope. Look. I can see the tag on the back of her. She’s fake.”

Oh I noticed the tags too. But it was late and I thought there’s no way the kids will notice. They’ll be way too excited.

C, my 5 year old is standing there. Looking at the elf. Looking at me. I can see she needs me to fix this. She so badly wants to believe it’s real.

So save the day I do.

“Elves must be very busy. She was probably rushing and forgot to tuck it in.”

“If she’s a girl, then where’s her skirt? She’s got no clothes on. In the book she’s wearing a skirt.”

Dammit. I knew I should have bought the skirt. So conveniently sold separately for the bargain price of $9.99. A piece of cloth the size of a soda cracker. Now I’m not cheap, but come on. Carol’s marketing people obviously aren’t aware of the recent PST hike here in Manitoba.

Completely avoiding the question I ask the kids what we should name her.

And just like that it’s on. I should have known. I live by the “save a fight, buy two” rule. Why would this be any different? After a few tears and dirty looks we hug it out and settle on Jingle.

The next morning C is up bright and early to look for our new elf. She goes into the kitchen, creeps around looking for it. She needs some help so I say “Oh C I think I can see her.”

Ok. What the f**k just happened here?? Carol’s book says this is a “charming tradition.” This is not charming. My five year old is terrified.

After I calm her down and show her the elf all perched on the cupboard I realize that perhaps I should have given this elf business more thought. And here is why.

One – this elf is a big commitment. Huge. Once you start you have to see it through. It’s kind of like childbirth, in the way that there is a point of no return. You can’t decide half way through that meh, this just isn’t my thing. And I don’t mean just this holiday season. Oh no. You are locked in until your youngest kid stops believing in things like Santa and elves. Because god forbid the elf doesn’t show up next year. So I’ll be doing this for at least another three years. Minimum.

Two – I had a friend say oh, just go on pinterest. There’s so many ideas! Word of advice, don’t listen to your friends. They are insane. Because I want to spend my evenings painting cheerios to look like little elf donuts for Christ sake. And toilet papering my Christmas tree. And making tiny Hershey kisses out of chocolate chips and tinfoil.

Seriously, do you people not work??

Three – and maybe it’s just my kids. But every morning starts with a fight now. C is always up first. So she finds the elf first. D gets up and C, bless her little heart, says something like “I promise I won’t tell you where it is today. But if I were you I’d look in the kitchen first. Definitely not on top of the fridge though.” Carol makes no mention of her kids fighting about finding it. In fact, it helped her children to “better control themselves.”

Starting to think Carol is just a little full of shit here.

Four – be prepared. For anything. Elf hasn’t moved in two days (oh yes, you will forget). Kids will notice and want an explanation. Have one. And I mean a good one. Also, have your barbecue tongs at the ready. Cause the bloody thing is sure to fall off its perch at least once. And this can lead to all kinds of drama and worry about lost magic if you touch it to put it back.

Five – one needs to assess all the nooks and crannies in their house. Count them. That number? That is how many days you should bring it out before Christmas. If it’s 42 days till Christmas it’s TOO DAMN EARLY. Carol says her elf usually comes around Thanksgiving. It should be noted that Carol lives in the US of A.

The list goes on and on. I hate to crap all over Carol’s brilliant idea here. The lady is set for life. But I feel like it’s at the expense of unsuspecting moms. Moms who are so caught up in wanting their kids to have great childhood memories that they take a momentary leave of their senses. Just innocent moms, minding their own business. Looking for a friggin book about juicing in Coles.

I walked out of that store with a three year commitment. Worst impulse buy EVER.

Yesterday I went to move the elf and found a note beside it. It read “ Dear Jingle. Will I get any presents this year? Please write me something back. Are you the elf that’s in the book? I wish you could take the angel off the Christmas tree really carefully and go up there. You just look so cute. I love you. Love your Best Friend D.”

Yes. I know. So if anyone needs me tonight I’ll be in my kitchen. Writing letters to my kids and making little elf snow angels out of flour.

If you want more Elf on the Shelf hating I have more here.

This is my friend Shauna, she was such a big hit last time she wrote on Mommy’s Weird and also this time I just had to have the girl back. This post about Elf On The Shelf is AMAZING! Shauna does not have a blog and only writes when I make her.  I think she should be on Mommy’s Weird monthly.  Yes, I am using her, she is such a big small town Manitoba deal that when she writes on my blog, my visits from small town Manitoba go up about 300%. It could just be all her ex boyfriends….. 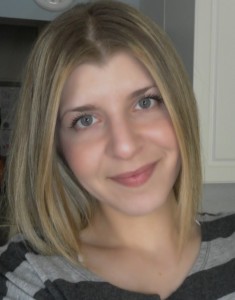